I have seen many interesting creatures behind a dog team over the years; wolves, moose, caribou, polar bear tracks, otter slides, the list goes on. However the night before Thanksgiving, I had one of the most interesting encounters I have had in a long time while running the race team late at night. I was on the final leg of a 30 mile run, about five miles from home and it was around 11pm. Up ahead I saw the glow of headlights; odd at this time of year, especially this late at night (okay let’s be honest odd at any time of year at any hour, other than the two weeks of deer season). As the lights neared, my suspicion grew that the car was driven by a lost soul, as it is only a very brave or very lost person that drives a Buick past our driveway on Deep Lake Road. I pulled over as the car approached and the window rolled down to reveal three very lost women from Texas, dressed to the nines. Once I recovered from being hit by a wall of perfume (we’re more used to the smell of pine needles and dogs around here) I asked them if they were lost; I have found it is always best to start with a very obvious opening question when you don’t know who you are dealing with.

Turns out they had left Texas that morning to come north and spend Thanksgiving with the one of the ladies’ stepfather, who lived a few miles away. They were in good spirits, but definitely thankful to see another human (or Sasquatch as they thought they should refer to me), as I think they felt as though they were driving to the end of the earth for this visit. They had typed the stepfather’s address into their trusty GPS, and it too, believing they were driving to the end of the earth, sent them in the wrong direction. We have a road named the Kelley Loop, and a road named the Kelley Trail in our “neighborhood”. I don’t know who Kelley was but he must have been important because there is an awful lot named after him around here. They wanted to go to the Kelley Trail- a nice gravel road right off the pavement; however they were headed on an adventure down an overgrown rugged class 4 road that has claimed two oil pans, a muffler, countless less essential underbody plastic car parts and multiple tow truck episodes, towards the Kelley Loop. Lucky for them I met them only a few miles before what, in a Buick, would be a hill that would be scary to go down and impossible to go back up.

So I wrote directions down for them, after explaining that I couldn’t run my dog team down the paved Highway 1, to take them to their destination, and continued on my run. They continued on until they could turn around then followed behind, retracing the last five miles of the night’s journey. I stopped again right before I turned in our driveway; I was a little concerned they would get lost again. When they caught up to me I drew them a map and went over the directions one more time. It was pretty straight-forward, as there were only three turns, but they were a little overwhelmed with the evening and it was getting late, so I thought better safe than sorry. I sent them on their way, after they took some pictures of the dogs of course, and asked if they would be correct in their use of the local vernacular if they used the word “ufda” to describe their situation.

I went to sleep that night feeling pretty confident that they should have made it to the stepfather’s house before I was even done feeding my dogs that night. However a week later the nephew of their stepfather stopped by and when we asked him if the three ladies had made it he looked at us like we were speaking Russian. So I keep my eye out for a silver Buick with Texas plates on all my runs now. 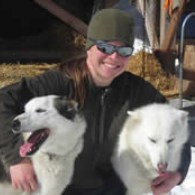 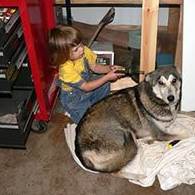